I get to listen to a program on Philadelphia’s WIP, 94.1. On the program, at six at night on weekdays, a personality, Josh Innis, who proclaims himself the King of Morons and Derelicts, talks about Philadelphia sports , but also adds a new flavor, and sometimes fun, to Philadelphia sports talk. He goes into his usual talk about sports, but mixes in his experiences, thus far, in Philadelphia. He goes into an experience where he listens to another Philadelphia station, known for Hip-hop, and Rhythm and Blues, and how they abuse a horn sound effect for the benefit of the listener; really, it is just as lame as their selection of repetitive music.

The bit brought something out of me. It is something that bothered me for a while. I like Josh as a radio host, and hope he stays in Philadelphia, but is more careful of the audience in this diverse city. Josh provides not only an expanse knowledge of sports in this town, but also a perspective based on his personal experiences. While it may be common for him to talk about a horn sound from another radio station, in some other city, in another part of Philadelphia, people just do not care. If you tell people about it, they will hold a bias against it, and you.

The article’s title starts with the name Seth MacFarlane. I truly like the work MacFarlane tries to do, at times. In some cases, in his work, he highlights hilarious topics. The content also takes a turn for the worst. The show Family Guy is a dumb, but fun, program. Family Guy delivers both content that is taboo, funny and topical, but with an opinion. The Cleveland Show is wrong on all levels. It is also part of an opinion. In both Innis and MacFarlane, I think what I am trying to say, those with an opinion, and given a media voice, deliver their content in the way they feel is best.

Sometimes, though, when they deliver that opinion, it is just their opinion, but the platform they deliver it on could, and should, be a place to deliver their content with kid gloves. I think kid glove is an understatement. The more extreme of kid gloves is what you can use to deliver your good news. It is not right. It should not be but it is. Any other way puts you in a place for criticism, threats, etc. I recall the movie Django Unchained. I will not watch the movie. It can be said Django Unchained and 12 Years A Slave counterbalance one another.

If Tarantino, is left to deliver the film, in his opinion, it is just his opinion, on topics, and experiences he knows, from his perspective, a magnified, personal, perspective. But, it gets the same press as any other box office action film, which will be what remains in the mind of the viewer. A more wholesome, magnified, opinion, from various perspectives, that speaks to all sides of a greater topic, in any media, would be better.

Seth MacFarlane plans a film for this summer, A Millions Ways to Die in the West. In the comedic western, where the main character fears the West but learns to change, his ways, in the end, the film takes, or took, risks in the content it presents.

In the film’s exclusive screening, on December 20, 2013, a shooting gallery, with slaves, exists in the film, whether it be in the theater, part of some of the film’s extras for Blu-Ray, DVD, or on the cutting room floor. This scene could be in the movie because there are no African Americans in the film. This can be taken, as someone’s attempt to highlight what he, or she, thinks is funny. It is an opinion, of a greater topic, in a film from only one perspective.

In the end, it is the creator’s right to choose what they put in their media, that is either their radio show, television program or film, but the hope is a more wholesome opinion, on greater topics, gets presented.

Before there was The Grandmaster, a film supported by Martin Scorsese, but directed by Wong Kar Wai, there was a movie called Ip Man, directed by Wilson Yip. While both films talk about Yip Man, they present it in different ways.

There is always a place to make hay. You understand that it can come from the lottery. It can really come from hard work, over time. It comes from the connections you make and the direction you take. But, in-between, how do you, through the struggle, remember what the final goal is?

You see fictional accounts of quest like in the Hobbit, Lord of the Rings, Stand By Me, etc, that have a specific goal for a group. In this case, you are just one individual. The concept is the same. You take on the idea of getting from point A to B.

But, the time in between can truly throw you off the track. Whether it is different opportunities, false opportunities, or anything, getting to the goal is dreadful. The hope is to invest in some hope parts of what makes that goal so great and to see it as enough to meet your final goal. 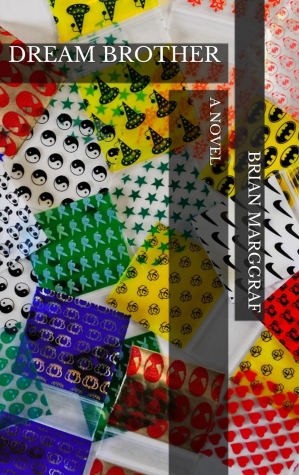 Please feel free to do any or all of the following with this post:

or just simply tell someone about it.

Alright, so I’ve been thinking… what do you people want?

What do the people of the great and glorious PC Master Race really want to see?

I’ve made this design, but I’m not sure I like it.

I haven’t seen anything like this one yet, and I would like to know if you people would pay for something like this in a poster, or on a T-Shirt or something similar. Even post cards, decals for computers, stickers maybe.. things like that.

I’d like some feedback on this, and if any of you have any ideas of what else to do that people might want/buy. 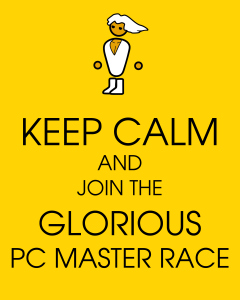 Hello all, as you may have noticed from Dyl’s post, we’re back. I’ve had my hands full with Tea-Powered Games recently. If you haven’t checked us out yet, go see if we are your cup of tea.

Sorry, I wouldn’t be doing my job if I didn’t at least mention it, but I think we have some exciting stuff brewing for anybody who wants to see games tell stories in new and interesting ways. With the shameless plug out of the way, let’s talk about a game you might know nothing about: Democracy 3.

“Everything you want is on the other side of fear.” – Jack Canfield

Let me tell you about fear. It’s poison. It’s poison for your mind. It makes you lose control, it makes you freeze, it makes you take the wrong decision. When you let fear take over, you’re just an echo of your former self. An empty shadow and nothing more.

So… what is there to be had on the other side of fear?

I own a Wii U. I am actually proud of it. I play Tekken Tag Team, at times. It is an older game, but it’s crisp, efficient, has competition online and true character customization. Wii U, as a whole, I wish to have more games that use the components in the Nintendo Wii U.

In short, there is no existence of a Wii U World but the console has the ability, within itself, it seems to create, extend and add-on to video game worlds.

Let me explain. Zombi U is a fun game. It’s got action, scares, plenty of action and depth. In all, it’s an early show piece for the Nintendo Wii U. The Wii U console has many characteristics that could add to the game. The Nintendo Wii U can go online.

The question is why can’t players, after their Zombi invasion, and experience, go online to compete, or cooperate, in missions to take down parts of the game, in the continuing invasion, or compete in simple human versus human, or Zombi versus human, etc., games?

The Miiverse, a communication system on Wii U, could be a place for Zombi U players to communicate, and come up with strategies, and take down Zombis online or simply exchange customized weapons and experiences.

They have a game Art Academy, where players can create art on their Wii U. If players could take this art and post it in different spaces in their Nintendoland parks, or other Wii U games, for a small price even, it would go a long way in making the Wii U into the world you want.

The existence of a game like Disney Infinity is a start. The hope is a Mario title comes to the Wii U with four player online multi-player and Mii Verse communication.

The hope is the Wii U gets a chance to highlight a new, custom, third party title, another company’s game besides Nintendo’s, that uses the Wii U’s capabilities and Nintendo can quit playing around. As for us, we can go to Mii Verse and tell Nintendo what we want.

All we can do is hope.You could also check out an article at Kotaku, The 12 Best Games for the Wii U , and imagine if the Wii U uses all its ability, what will it bring and will it make your Wii U World?

A next generation Star Wars prepares to come to life. J.J. Abrams has all the elements in place to start either a new generation of Star Wars lore or more critical analysis of this generation’s take on just what Star Wars means to them.

This is what the next Star Wars will stand against. It is a new interpretation of experiences in film and Star Wars experiences to create a new Star Wars legacy.

The question is can people simply reduce expectations and experiences in order to slip into a simpler skin? When George Lucas first made Star Wars, it was not a hit. It was an experiment. It was a new exploration of space. It was a fresh story. It lets millions imagine, invest, in so much merchandise, and see “…a galaxy far, far away”.

Get the popcorn; get candy and the speakers calibrated. A movie will come out, in the next year, that will be in space, will have light sabers, ray guns, droids and many aliens. The movie will not be George Lucas’s take as much as a different perspective that should be interesting.